While Annie runs an extraction mission of a Chinese scientist she's been corresponding with who is willing to defect, she runs into complications and is forced to make a difficult choice when they both seem to have been poisoned with polonium. A friend of the scientist at the Asian Cultural Organization is the prime suspect when Annie discovers he may be a spy for the PLA special forces. Meanwhile, Joan transfers Jai to a new division in Arizona, and after two years, Annie finally tells Danielle her CIA secret, leading her sister to distrust her and ask Annie to move out. 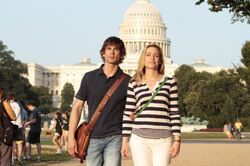 Retrieved from "https://covertaffairs.fandom.com/wiki/World_Leader_Pretend?oldid=1519"
Community content is available under CC-BY-SA unless otherwise noted.